KIRKLAND, Washington (April 7, 2021) – Brokers with Northwest Multiple Listing Service (NWMLS) added 10,562 new listings to inventory during March — the highest volume since September when they added 11,210 properties to the selection. Even so, demand continued to outstrip supply, keeping inventory depleted.

The latest statistical summary from Northwest MLS shows double-digit price hikes were widespread across the 26 counties included in the report for the month of March. Brokers logged 10,863 pending sales last month. That volume of mutually accepted offers marked a 22.3% increase from a year ago and a 40.6% surge compared to February.

“There’s no April fooling when it comes to how hot the housing market is right now,” commented J. Lennox Scott, chairman and CEO of John L Scott Real Estate. “In King, Snohomish, Pierce and Kitsap counties, the current spring market we’re seeing is one of the best on record.”

James Young, director of the Washington Center for Real Estate Research at the University of Washington, agreed, noting March marked the first post-COVID/pre-COVID comparison. “It is very difficult to compare year-on-year results once lockdown started in late March 2020,” he stated.

“The drop in the number of active listings between now and last year is extraordinary,” Young exclaimed.

NWMLS statistics show a 55.9% decline in total active listings, shrinking from 9,418 at the end of March  2020 to 4,153 at month end. Young noted the decrease is even more pronounced in “peripheral counties.” Six counties (Clallam, Clark, Island, Kittitas, Mason, and San Juan) experienced year-over-year declines of 69% or higher, according to the latest report from Northwest MLS.

“This collapsing active listing volume in the face of high demand is telling. As this was occurring, the number of pending transactions year-over-year increased markedly. Double digit price increases throughout the region are the natural result,” said Young.

Last month’s median price on closed sales of single family homes and condos (combined) was up 7% from February’s figure of $512,000.

Excluding condos, the median price on single family homes rose nearly 21% from a year ago, from $470,000 to $567,250. Compared to the previous month (February), prices were up 10% OR more in seven counties (Cowlitz, Douglas, Jefferson, Ferry, Island, King, and Pacific).

In King County, the median prices for single family homes that sold last month in the Queen Anne/Magnolia area and every MLS map area on the Eastside topped $1 million.

Scott noted the local market is “nearly sold out all the way up into luxury price ranges,” adding it is not due to a lack of new listings, but because of high buyer demand. “We’re seeing more luxury listings, which means there are more buyers entering into the market in these price ranges. This translates into very strong intensity into these luxury price ranges.”

John Deely, a member of the NWMLS board of directors and vice president of operations at Coldwell Banker Bain, described the numbers as “truly astounding related to price appreciation and inventory on hand.” As an example, he pointed to Snohomish County, where there is only about one week of inventory and where median prices for single family homes are up nearly 22%.
Condominium prices rose 5.2% year-over-year on closed sales that increased 16% (from 1,015 closings a year ago to last month’s total of 1,179). The volume of new listings (1,528) was similar to the year-ago total (1,455), while the number of active listings (total inventory) dropped 23% YOY. Pending sales of condos surged nearly 43% from a year ago (from 1,101 to 1,574).

“While the data suggest housing sales overall may be slowing, that is related directly to a lack of
inventory,” Deely emphasized.

“If no new inventory came on the market, we are at 2.19 weeks of inventory, leading to bidding wars, escalating prices, and severe buyer fatigue,” Hansen remarked. Windermere Chief Economist Matthew Gardner also commented on the imbalanced market.

“There was a significant increase in new listings between February and March, but despite this, total active inventory was lower. This is a clear indication that the market remains very bullish, and homes are selling lightning fast across all price points, even in the luxury market.”

“I think a lot of the urgency from buyers is due to rising mortgage rates and the fear that rates are very unlikely to drop again as we move through the year, which is a safe assumption to make,” added Gardner.

Despite exhibiting a sense of urgency, buyers are doing due diligence to win the sale, reported Dean Rebhuhn, owner at Village Homes and Properties. “They are doing pre-inspections, including strong pre- approval for financing and deciding what price works for them. Many purchasers are considering the list price as the opening bid and making price decisions that work to their advantage,” he explained.

Escalating prices are found throughout the Northwest MLS service area.

“Most of the rapid price increases follow the familiar trend of late where the I-5 and I-90 corridors outside of King County are showing exceptional levels of house price growth,” observed Gardner. “Median house price growth in Skagit County (27.3%), Kittitas County (43.8%), Thurston County (21.2%) and Whatcom County (20.8%) all outperformed King County at 14.7%,” he noted.

Kitsap, Snohomish, and Pierce counties also outgained King County’s price growth. Competition for the limited supply of homes is intense in Kitsap County, according to Frank Wilson, Kitsap regional manager and branch managing broker at John L. Scott Real Estate, Poulsbo. Inventory in that county is down more than 64% from a year ago, and like many counties, pending sales are outgaining new listings.

“The real story is about the pent-up demand of buyers who are jumping at each new listing that comes on the market,” Wilson reported. With COVID-related limitations on open houses, he said each open house is bracketed by many showing appointments. “It is not unusual to have 30 showings and half a dozen offers during the short time a home is on the market.”

Wilson estimates half the buyers in Kitsap County already live there and are just relocating. The other half are new to the area and are inclined to move there to leave more congested areas. Others are changing lifestyles now that they can work from home more, a military move, or simply to be closer to family and friends, according to Wilson.

Both local and national industry-watchers detect rising optimism for the spring housing market.

“We are certainly seeing a return to optimism in our market as businesses continue to open up, more residents become vaccinated, and we all look forward to getting back to a more ’normal’ way of life,” said Mike Grady, president and CEO of Coldwell Banker Bain.

Grady pointed to a recent national jobs report as one reason for surging confidence. That report showed broad-based employment gains, including significant growth in areas hit worst by the pandemic, such as the leisure and hospitality sector. As the labor force continues to grow, Grady said, “We can expect the real estate market to continue to benefit.”

Grady acknowledged buyers will still face challenges. “We’re seeing mortgage rates and inflation start to increase, along with lumber costs, which will affect the costs of new construction.”

Other pressure may come from the migration of tech workers in our area, suggested Grady’s colleague, John Deely. He cited a new report from CBRE that shows the Seattle/Bellevue region now ranks #1 in technology office space leases, eclipsing San Francisco for the first time since 2013. “For the foreseeable future, buyers will need to bring their patience, a qualified and experienced broker, and a realistic outlook on the financial implications of this market as they search for homes.”

James Gaines, former chief economist at Texas Real Estate Research Center, noted the housing industry has been one of the country’s primary economic drivers during the pandemic “and not just because of low mortgage rates.” Pandemic lockdowns meant millennials’ spending for travel and entertainment was curtailed enabling them to save. “More than 40% of U.S. home purchases in 2020 were by first-time buyers,” he noted, but said he anticipates getting back to “more normal rates of increase” marked by smaller growth in home prices and sales.

A recent report by Bloomberg noted the 30-year fixed-rate mortgage rose to 3.17%, the highest level in more than nine months, after falling to an all-time low of 2.65% in January. 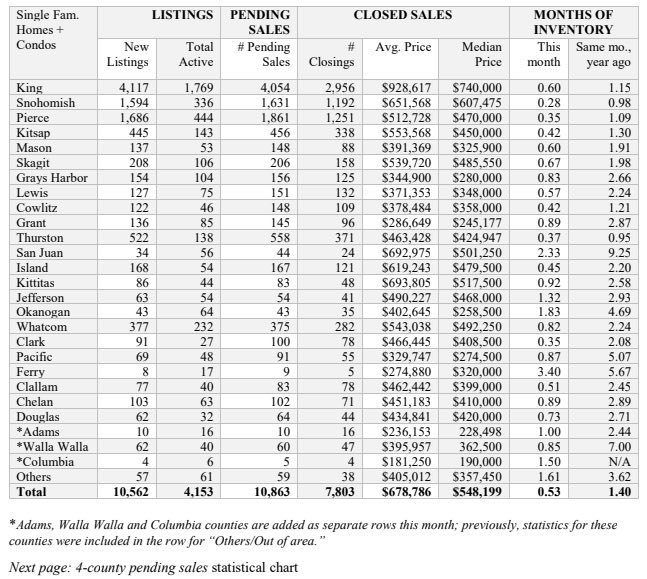 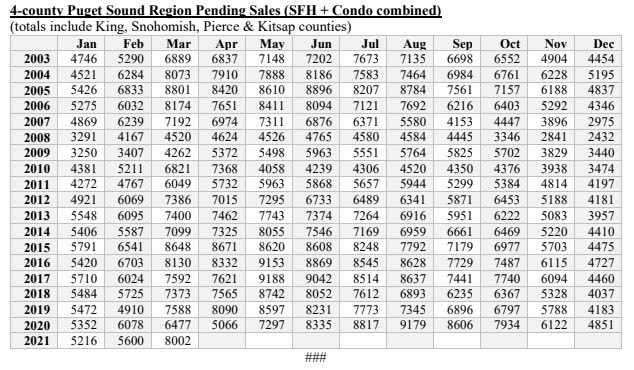 Northwest Multiple Listing Service is a not-for-profit, member-owned organization that facilitates cooperation among its member real estate firms. With more than 2,500 member firm offices and 32,000 brokers across Washington state, NWMLS (www.nwmls.com) is the largest full-service MLS in the Northwest. Based in Kirkland, Washington, its service area spans 26 counties and it operates 21 local service centers.